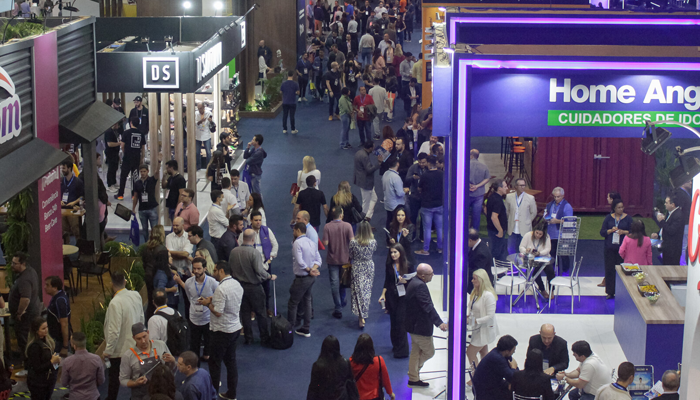 After two years in a pandemic period, ABF Franchising Expo, one of the largest franchise fairs in the world, returned with news and showing the desire of Brazilians to undertake in business. The 29th edition of the event took place between the 22nd and 25th of June, at Expo Center Norte, in São Paulo. In four days of the fair, the visitation reached 65 thousand people, including entrepreneurs from all over Brazil and abroad. The event also brought together 457 exhibiting brands, with nearly 200 participating for the first time.

In addition to all the fair’s programming and stands, Franchising Brasil — the result of a partnership between the Brazilian Trade and Investment Promotion Agency (ApexBrasil) and the Brazilian Franchising Association (ABF) — brought five Latin American investors to the exhibition. The group came to Brazil to get to know the program franchises with a booth at the fair and was made up of the following guests: Marcela Varas Cataldo, from Chile; Christian Trovato, from Paraguay; and the Peruvians Jorge Wong, Richard Lovon and Martha Garate Chavez.

The fair represents and leverages a sector that has already recovered from most of the impacts of the pandemic. Franchises recorded a growth of almost 14% in 12 months, attracting more and more investors. The total volume of units grew by 9.1% in 2021. Currently, Brazilian franchising earns more than R$185 billion and has more than 171 thousand operations in the country, with almost 1.5 million direct jobs.

ABF’s president, André Friedheim, couldn’t be more satisfied with the results of the event: “Without a doubt, this was the fair of the sector’s recovery after two challenging years of the pandemic. It is very important to note that interest remains on the part of both sides: franchise chains with aggressive growth plans, and entrepreneurs eager for novelty and profitable businesses. The face-to-face meeting continues to be a very favorable atmosphere to make this match, leveraging the growth of the sector in the coming months”, he concludes.

In parallel to the event, Franchising Week, the largest meeting of the sector in Latin America, took place. This year’s edition was held between the 20th and 24th of June and had the participation of about 5 thousand people, including in person and online. The event resumed the strong networking that is so characteristic of franchising, promoting five intense days of immersion in quality content in the sector, with debates and lectures by renowned experts.

Diogo Capuzzo, superintendent of Niches, Chains, Franchises and Partnerships at Banco Santander, a network that participated in the 29th ABF Expo, says he had a great experience at the event. “Santander has been a ABF Expo’s partner for seven years. In this edition, we managed to obtain more than twenty contacts for future business, in addition to the franchises that are already our customers. Our participation was super satisfying. We will increasingly be inserted in this sector, closer to franchisors and ABF, so that we can actually help companies and people to prosper”, he quotes.