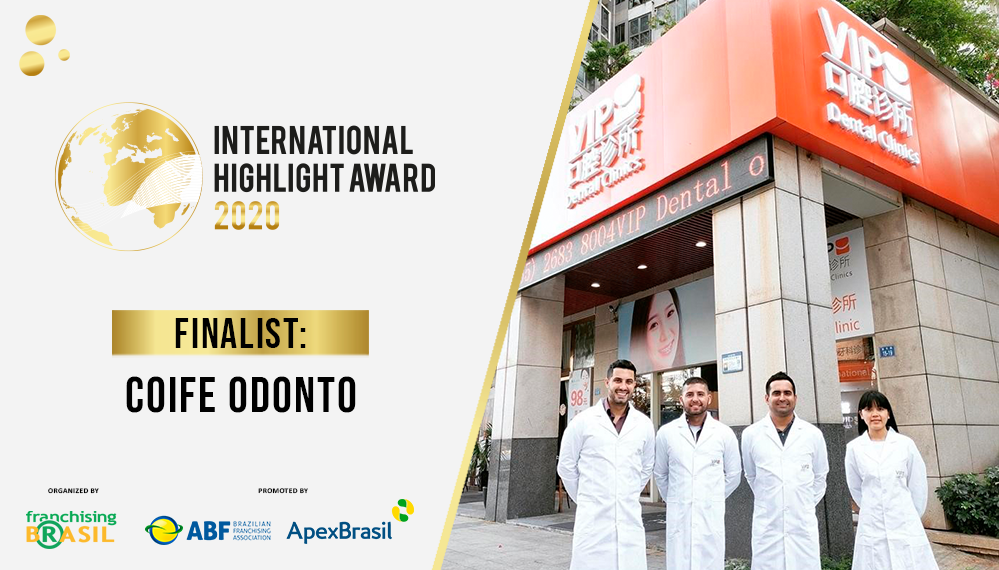 One of the finalists in the International Highlight Award, Coife Odonto is a dental clinic franchise and started operating in China in 2020. The chain is a member of Franchising Brasil — a sector project for the internationalization of Brazilian franchise brands carried out by means of a partnership between the Brazilian Association of Franchising (ABF) and the Brazilian Trade and Investment Promotion Agency (Apex-Brasil) —, which is promoting the first edition of such prize.

The history of the company in the China began in 2016, at the ABF international congress, when CEO Rodolfo Magalhães saw a talk about the Chinese market. Fascinated about the numbers, he discovered that Brazilian franchises were still rare in that country, so he immediately started carrying out preliminary studies with his team in Brazil. In October of the same year, the Coife Odonto’s team went to China for the first time and visited many provinces to analyze the territory and decide on a potential investment. During that trip, the entrepreneurs made contact with the Chinese dental association, which guided them regarding the paths to be followed.

The following years required additional efforts and studies from the team led by Rodolfo, who attended many international fairs in Brazil and abroad and made contact with investors, analyzing every possibility. Magalhães considers the International Franchise Expo NYC 2017, in which a Brazilian delegation participated thanks to the support of Franchising Brasil, as an important milestone in the process, because it was there that the company started exploring its internationalization path deeper. The businessman also mentions a market research that served as the turning point and basis for the team to continue with the expansion plan, since the material revealed the scenario of the dental segment in China, its gaps and opportunities.

In 2018, Coife Odonto went to China again to participate in CIIE (China International Import Expo), one of the largest fairs in the world, where it had the chance of having its brand exhibited in a local TV station. “The interview we gave was fruitful. Some visitors came from distant places in China just to get to know about our business model”, says Rodolfo.

The project started getting off the drawing board between the second semester of 2019 and the first of 2020, when VIP Dental, the first clinic of the chain, was opened in February in the city of Shenzhen. Rodolfo Magalhães points out that the process wasn’t simple and the company in China has continued with 100% Brazilian investment. There were two attempts at joint venture with local partners who didn’t go through, but each step of the journey was crucial.

Impact of the pandemic for Coife Odonto

The first epicenter of the coronavirus pandemic, China had months of lockdown, what generated many uncertainties regarding the market. VIP Dental had to face such challenge. Rodolfo recalls those days and praises the way the city dealt with the situation. “It was a delicate moment, all companies stopped their activities and we had to wear face masks. But Shenzhen suffered just a small impact, and the actions taken by the Chinese government to prevent the pandemic from spreading were amazing. It was a combination of technology, actions and proper behavior of people who have faced things like that before and know how to slow down and wait a while”, he adds.

Today, the CEO of the chain looks back to the path with a mixed feeling of relief and proud. VIP Dental is now operating in China and there are some negotiations going on. “Despite all difficulties the country has been facing because of the closed borders and the decreased number of customers, the past three months were great for us. Our revenue has been increasing and breakeven was reached in the second month of operations; we had profit in the third month already”, says Rodolfo.

A company founded and headquartered in the city of Jundiaí, countryside of São Paulo, Coife Odonto currently has over 200 franchise units in Brazil and was awarded 10 ABF Seals of Excellence in Franchising.