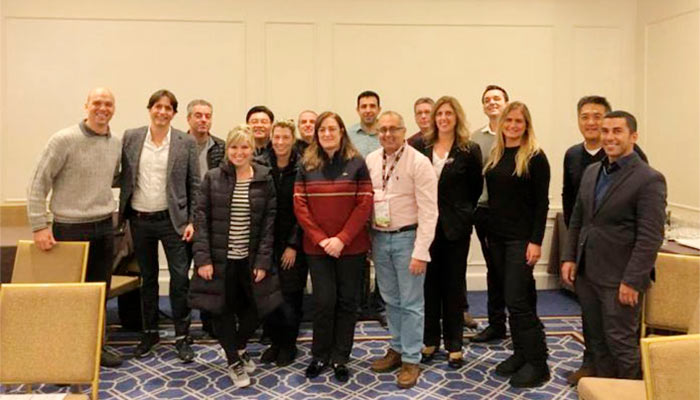 ABF Group at the opening meeting of the NRF 2018
First mission of the Brazilian franchising delegation in the year accompanies in New York the main event of the world retail. Insights brought by the group will be presented at the Post-NRF ABF on February 6, in São Paulo.

ABF begins 2018 with its first international mission of the year in New York to accompany the NRF Retail’s Big Show, analyzing today’s and future retail market. On Saturday (January 13), President Altino Cristofoletti Junior represented the entity in the already traditional meeting of the Forum International Retail Association Executives (FIRAE), body linked to the National Retail Federation of the United States, to discuss the main subjects of the global retail market. On the same day, the delegation of Brazilian franchise, also composed by the president of ABF Section of Rio de Janeiro, Eliane Bernardino, held the opening meeting of the mission, which will go until the 20th.

Representatives of the world retailer Market at the FIRAE meeting

In addition to attending the congress with dozens of lectures previously selected, the ABF Group has exclusive activities and simultaneous translation. On this Monday (15), the delegation takes a guided tour by Regiane Relva, CEO of VIP-SYSTEMS and member of the ABF Group, to the Technology Fair of the sector with more than 600 exhibitors. In its 109th edition, the largest event in the world retail sector brings together, from January 14 to 16, more than 35 thousand retail participants from 95 countries.

The content curator of the ABF Group at the NRF Big Show is made by Cristofoletti, Jae Ho Lee, director of communication and marketing of the entity, Eduardo Terra, president of the Brazilian Society of Retail and Consumption (SBVC), Alberto Serrentino, its vice-president, Julio Takano, CEO of Kawahara Takano Retailing, Regiane Relva and Adir Ribeiro, founder and president of Praxis Business. According to Ribeiro, Sunday (14), the first official programming day of the event, brought several success stories and practical (as well as strategic) tactics and tips on how to deal with this world of transformations that especially involves the retail and physical store.

Still, according to the expert, “the strength of retail for the US economy, moving US$ 2.6 trillion and having a strong impact on US GDP, beyond the jobs generated”, was evident. “Another relevant fact is the positive momentum of the American economy, which keeps them lively and relatively low level in unemployment, compared to other editions where the mood was lower,” he notes.

A series of five lectures with cases of success moved the day of the ABF Group. At first, the unusual marked the presentation of the Levi’s case. James Curleigh, president of the traditional brand, more than 150 years old, innovated when arriving on a bike, in the middle of the auditorium, with a jacket connected to the phone and a GPS. Curleigh showed how Levi’s, almost synonymous with jeans in the world, is shaping up for this new future of sudden changes. For Ribeiro, “it was a real class of strategy of a business that did not stop in time, despite the numerous competitors in the global markets where it operates, and still maintains the leadership.”

In the panel “Entrepreneurs Rock Stars and the New Generation of Retail”, the four essential elements that the brands of the future need to have are: obsession with the customer, meaning something (relevance), constant innovation and news and delivery of a shopping experience in all points and without friction. Brands that innovated deserved prominence in the panel. These were the cases of & Pizza, which established possibilities for connecting with customers’ social media, and The Museum Ice Cream, which brought a totally innovative proposal to communicate with customers at the point of sale and their digital media, generating greater engagement with consumers – even if it is a product with several competitors in a market with little differentiation.

Fairly crowded, the third talk of the day had as its theme: “Watching retail trends, inspirations behind the transformations of Amazon.” Kate Ancketill, from GDR Creative Intelligence, a British consultancy specializing in Retail, has brought several successful cases, reinforcing the physical store as a key in this process to understand and serve this new market. Kate spoke of the disruptions that an Amazon and Alibaba are causing in the market and made important reflections.

The ABF delegation then followed a conversation with the Walmart president. Doug McMillon brought his vision, especially focused on managing people and how the retail giant is moving forward on that specific front to compete in this increasingly disruptive global marketplace.

In the fifth and final talk of the day, “The future of retailing, how technology is changing the game” was the subject analyzed. Journalist Jennifer Jolly interviewed two relevant people from this new business landscape on how social networks can boost business of entrepreneurs: Marne Levine, COO of Instagram and Taylor Haney, founder of Outdoor Voices, a brand that sells products for daily outdoor activities.

The Brazilian franchise delegation at the NRF 2018 closed Sunday with a Networking Meeting with the BTR group.

All the insights gained by the ABF Group at the NRF Retail’s Big Show 2018you will know in detail in the Post-NRF ABF. The event will be held on February 6 in São Paulo and registrations are already open and vacancies are limited.