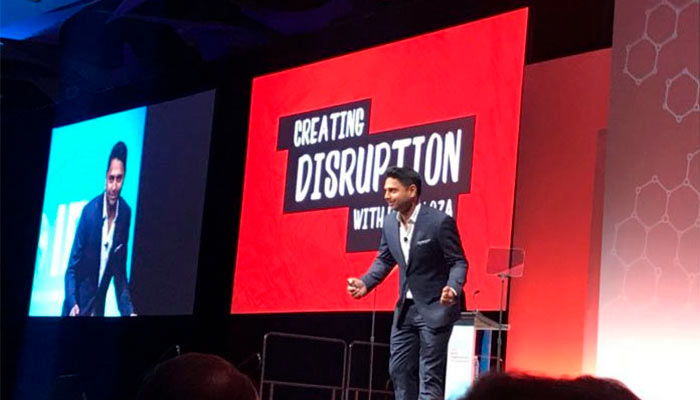 Rohan Oza: “Either you cause disruption, or you die”
Case in innovation, Rohan Oza, co-founder of venture capital firm CAVU, told in the opening lecture of the event how it turns little-known companies into disruptive and innovative businesses. This and other cases and insights will be detailed in the Post-IFA ABF, on February 28, in São Paulo.

The 58th Annual Convention of the International Franchise Association (IFA) 2018, which began on Sunday (February 11) in Phoenix, Arizona (United States) places business innovation and disruption at the heart of the debate.

The traditional exclusive opening meeting of the ABF Group held the previous day marked the preparation of representatives of Brazilian franchising for the largest event in the sector in the world, which will go until the 13th, bringing together some 3,800 franchisors, franchisees and suppliers of the franchises from various countries.

At the official opening, the president of the IFA, Robert Cresanti, demonstrated to recognize the efforts made by ABF to strengthen the sector. According to him, the Brazilian entity has been doing a strong work of “joint emplayment” through its participation in the Legal Committee of the IFA and also for its national action.

Case in innovation, Rohan Oza, co-founder of venture capital firm CAVU, told in the opening lecture of the event how it turns little-known companies into disruptive and innovative businesses. African from Zambia, Oza grew up in England and settled in the United States. There he founded the then-unknown Glacéau, a beverage company maker of Vitaminwater, created after he was Coca-Cola’s marketing executive and for whom he sold it for US$ 4.1 billion later. According to Oza, there is disruption in everything today and creating it must permeate the whole company. “Either you cause disruption, or you die,” he says. Still according to the investor, franchising leads the movement of entrepreneurship in the world.

In one of the parallel panels assisted by the ABF Group, Richard Greenstein and Richard Morey, members of DLA Piper’s office, Tom Kaiser, a journalist of Franchise Times magazine and

Liam Brown, IFA’s vice president and CEO of the Marriott network, focused on franchise trends for 2018, the key issues surrounding the industry globally, among other issues.

Franchising 30 years ago, Marriot has been leading the American hotel ranking for 50 years. The network has 970 franchisees in 27 brands. According to Brown, 80% of the lodging in the United States is under the care of franchisees and they represent 50% of the overall revenue of the network.

The first day of IFA 2018 was full of lectures on the most diverse and important topics of interest to professionals in the industry. To know in detail all the insights and the rich content brought by the delegation of the Brazilian franchising in the event, sign up for the Post-IFA ABF. The meeting will be held next February 28, in the auditorium Santander, in São Paulo. The vacancies are limited!