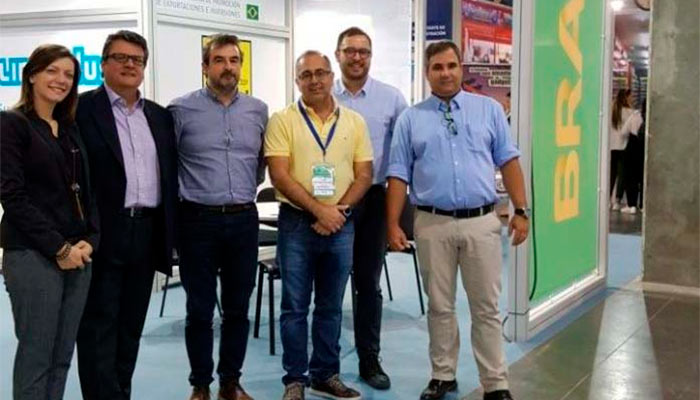 Representatives of Brazilian brands, ABF and Apex-Brasil in SIF 2017
The brands Geofusion, Limpidus, Louyt, Lug’s and Nobel were exhibitors in the Brazilian stand in the International Franchise Show of Spain.

Representatives of Brazilian brands, ABF and Apex-Brasil in SIF 2017

The Brazilian franchise once again was present at the International Franchise Show (SIF) in Valencia. The brands Limpidus (from Cleaning and Conservation segment), Livraria e Papelaria Nobel e Louyt (Communication, IT and Electronics segments), Lug’s (Food segment) and Geofusion (supplier of geomarketing solutions) presented their products and services at the Franchising Brazil stand, coordinated by ABF and Apex-Brasil (Brazilian Agency for the Promotion of Exports and Investments).  Recognized as one of the leading fairs in the sector in Europe, SIF 2017 was held from October 19 to 21.

In addition to participating in the fair, representatives of Brazilian brands had business meetings with the Chamber of Commerce of Valencia, franchise law firms and consultancies. The meetings were scheduled by the international area of ABF.

ABF, as a member of the Ibero-American Federation of Franchises (FIAF), participated in the biannual meeting of the entity, which takes place together with the Spanish fair. The president of ABF, Altino Cristofoletti Junior, and Fernando Tardioli, director and secretary of the legal area of both entities, respectively, presented an overview of the sector in Brazil and the legal issues that involve the Ibero-American region.

According to data from ABF, Spain is the seventh destination country of Brazilian brand exports. There is, therefore, much room for the growth of Brazilian franchising in the Iberian country.