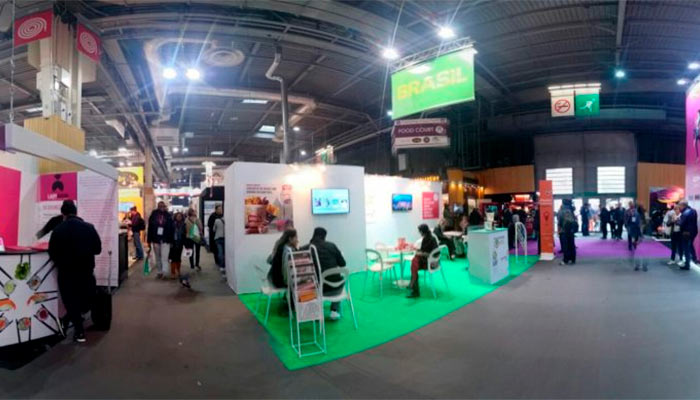 The 2017 edition took place between March 19 and 22 at the Porte de Versailles Exhibition Center, with 37 thousand visitors, investors from 83 countries and 530 exhibitors. LUG’s and Habib’s represented Brazilian franchising.

The Fair gathered 37 thousand visitors and investors of 83 countries. At the International Pavilion, Brazil was the sole representative of Latin America

The 2017 edition took place between March 19 and 22 at the Porte de Versailles Exhibition Center, with 37 thousand visitors, investors from 83 countries and 530 exhibitors representing more than 450 franchisers from 87 different sectors. In addition to the participation of companies from 23 countries, France, Serbia, Netherlands, Italy, the United States and Brazil – the sole representative of Latin America – were present with institutional stands.

The delegation of World Franchise Council (WFC) arrived in Paris on Saturday evening (18) and was received by the Fédération Française de la Franchise (FFF) at a welcome dinner on the premises of the Louis Vouitton Foundation, which was attended by The president of ABF, Mr. Altino Cristofoletti Junior, the director of market intelligence, Mr. Claudio Tieghi and the international project manager, Mr. Bruno Amado. On the 19th, WFC member countries participated in the official opening of the fair and visited the entire exhibition center.

Representatives of Lug’s team at the Brazilian Stand

ABF in partnership with Apex-Brasil (Brazilian Exports and Investment Agency) promoted two brands of the food segment: newcomer LUG’s who even offered tastings of its products to the public, and Habib’s, in its second consecutive year of exhibition, confirming its interest in establishing the company in Paris.

Considered a mature market with strong cultural features, France also has a well-established franchising system which also helps to attract and generate business to various parts of the world. “The strategy of exposing two brands in the Brazilian Pavilion contributed for a better assimilation by visitors and investors of the concepts and business models and operations of the Brazilian brands,” said Claudio Tieghi.

Accomplishing an intense agenda, the ABF team and exhibiting brands were received on March 22 at the Brazilian Embassy in France by the Minister Counsellor for commercial and investment affairs, Mr. Caio Renault. The representative of the Brazilian government in France received the group enthusiastically, he was surprised with the data of the recent research on the sector carried out by ABF and welcomed the demands of Brazilian brands, opening spaces for cooperation projects between both countries to promote Brazilian franchising in the French market. “Establishing an approach with Brazilian embassies in the countries where we have carried out the Franchising Brazil project in partnership with Apex-Brasil contributes to streamline the institutional relationship of the networks with local society, and it also facilitates the understanding of the administrative procedures inherent to the opening of business in a foreign country. Everyone ends up feeling at home,” comments Bruno Amado.

According to Ana Cláudia Oliveira, operations director of LUG’s network, the company carried out more than 150 contacts of potential investors from France, Tunisia, Saudi Arabia, Algeria and Belgium, among others, with prospects of generating business in the order of 500 thousand Euros until the next edition of the event, in 2018. “The people who visited us in general were enthusiastic about the idea of having a Brazilian brand in the food industry with products of such high quality,” he said.

ABF successfully concluded its participation in the Franchise Expo Paris, also celebrating the establishment of an agenda with the FFF for the exchange of experiences between the Scientific Committee of the institution and the Market Intelligence Board of ABF in the coming months. “There are many opportunities for mutual collaboration in the field of data and knowledge generation for global franchising,” says the President of ABF Mr. Altino Cristofoletti Jr., since FFF has been conducting researches for more than 20 years and ABF, through the Seal of Excellence in Franchising (SEF), holds its 27th edition in 2017 and concludes the recently initiated Business Intelligence project.