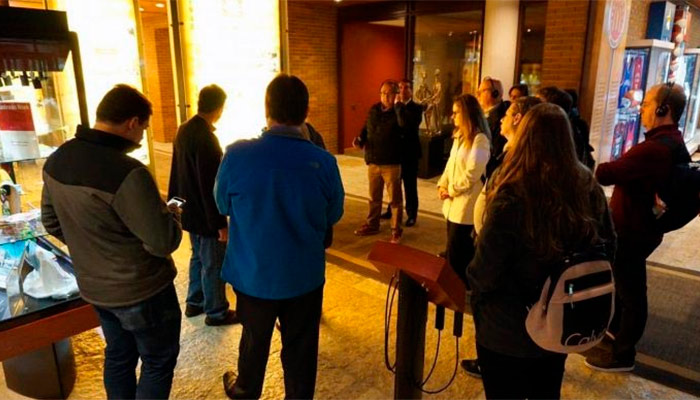 The Brazilian delegation visited McDonald’s Hamburger University, and had a networking cocktail with representatives of the Brazilian Consulate in Chicago.

The ABF Group during a technical visit to McDonald’s

On Friday (19th), second day of activities in Chicago to accompany the 2017 NRA Show, the ABF Group had an agenda with an assorted menu, with technical visit and business meeting.

To begin, in a guided technical visit to McDonald’s, the Brazilian delegation was received by the development vice-president of McDonald’s Brasil, Dorival de Oliveira Jr. The executive presented the Hamburger University and details of the operation of one of the biggest fast food chains in the world. In appreciation of the company’s receptiveness, ABF presented it with a plaque delivered to Michael Bullington, the chain’s operations consultant.

At night, the group attended a networking cocktail and business meeting (matchmaking) in the Grand Salon of Hotel Trump International & Tower.

The event was attended by Altino Cristofoletti Jr, president of ABF; Alexandre Guerra, vice-president; André Friedheim, international director and João Baptista Junior, coordinator of the entity’s Food Service Committee. Also present were representatives of the diplomatic staff of Brazil and commercial area of the United States: the ambassador Maria de Lujan Caputo Winkler, consul general; Maria Tereza Bacellar, adviser and head of the commercial sector; Tatiana Lyra and Natália Crestani, commercial experts from the Brazilian Consulate in Chicago, and Renato Sabaine, commercial expert of the US Commercial Service (linked to the US Consulate).

The ABF Group will be presenting the highlights of its international m mission to Chicago at ABF Post-NRA. The event will be held together with the 11th ABF Food Service Sector Symposium, which opens the Franchising Week, on June 19th, at Expo Center Norte in Sao Paulo. Register.