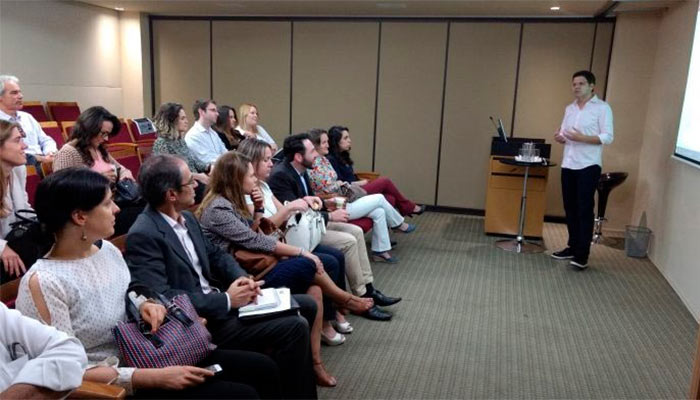 André Frieheim: “The Brazilian franchisor today is much better prepared to export”

Meeting preceded the ABF/Apex-Brasil mission for the International Franchise Show in Valencia, which will be held between October 19 and 21.

ABF brought together representatives from the associated brands, the Consulate and the Chamber of Commerce of Spain on the last day September 27 for a Chat about the Spanish Market.

The meeting preceded ABF’s mission in conjunction with Apex-Brasil (Brazilian Agency for the Promotion of Exports and Investments) for the International Franchise Show (SIF) in Valencia. The fair – to be held from October 19 to 21 – is currently one of the leading sector in Europe. Organized by the international area of the organization, the chat was led by André Friedheim, director, and Bruno Amado, international manager, with the participation of Vanessa Bretas, market intelligence manager, Carlota Carneiro, ABF international consultant, and Sérgio Milano Benclowicz, director of Franchising Ventures – holding company that includes brands like Nobel, Café Donuts, Serviços do Futuro and Zastras Brinquedos.

The internationalization movement of Brazilian brands grows every year and tends to intensify. “The Brazilian franchisor today is much better prepared to export,” Friedheim said. According to the director of ABF, the Brazilian franchises are attractive and Brazil is a pleasant country in the eyes of the foreign public, which favors the expansion of the brands made in Brazil for the whole world.

Part of the Franchising Brazil project (www.franchisingbrasil.com), the ABF/Apex-Brasil mission to Spain involves, in addition to participating in the show, the identification of potential partners, business meetings with local companies, dissemination of the participating brands to the target public of exposure and technical visits. Brands interested in participating in international missions need not be associated, just join the project. During its stay in Spain, ABF will participate in the meeting of the Iberian Federation of Franchises (FIAF), represented by President Altino Cristofoletti Junior, and by Fernando Tardioli, legal director of the Brazilian entity and legal secretary of Iberian entity.

Sergio Benclowicz talk about the successful experience of the Nobel’s network of bookstores and stationers in the Spanish market. “It’s an excellent market, the legislation is similar [to the Brazilian law], the language, the climate”, he said.
Currently with more than 200 units in Brazil and abroad, Nobel has been operating in Spain for more than ten years with master franchises, and is present in Portugal, Angola, Mexico and Colombia.