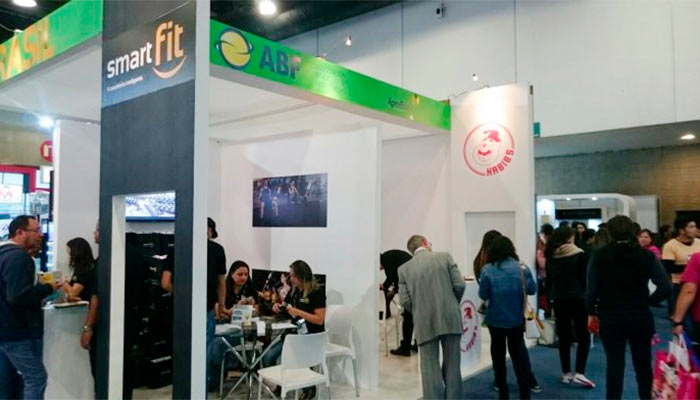 The mission was for FIF, one of the main fairs of the sector in the Americas, had the presence of Habib’s, LUG’s, Ortoplan, Patroni Pizza and Smart Fit / Bio Ritmo networks and Global Franchise Consultancy.

ABF and Apex-Brasil (Brazilian Exports and Investment Agency) promoted a mission of Brazilian franchasing entrepreneurs to the 40th International Franchising Fair of Mexico (FIF), held from 9 to 11 March in the Mexican capital.

The public of the fair knew something about the Brazilian franchising

The mission is part of Franchising Brazil Program, a partnership between both institutions. At the country’s stand, visitors had the opportunity to know the brands Habib’s, LUG’s, Ortoplan, Patroni Pizza and Smart Fit / Bio Ritmo, and the services of Global Franchise.

Participants of the Brazilian mission during the fair

According to Claudio Tieghi, director of market intelligence, relationship and sustainability at ABF (2nd to the left), “Brazilian franchising networks have shown greater interest in becoming international, participating in events such as FIF, to know different markets, seeking to develop structured business plans tailored to each country. Cultural similarities such as languages, consumer and business habits, among other aspects, contribute to accelerate the process of expansion of Brazilian brands,” he says.

The business meeting with potential Mexican investors was one of the activities of the Brazilian mission.

The mission had a heavy agenda in attending interested parties during the three days of the fair. There was a networking meeting with foreign delegations, potential franchisers and meetings with potential investors, among them Alsea Group, which owns 3,100 franchised stores of various brands in the Food segment in Latin America, and the commercial sector of the Brazilian Embassy in Mexico.

Considered as one of the main franchising fairs in the Americas, FIF 2017 brought together 380 exhibiting brands and received 35 thousand visitors. The expectation for generating business of the Brazilian brands exhibitors is US$ 10,500 million in the next 18 months.

According to an ABF survey, currently 13 Brazilian networks already operate in Mexico in the Home & Building segment (31% of participation), Fashion (23%), Educational Services (15%); Food, Communication, Informatics and Electronics, Hotel & Tourism, and Health, Beauty and Well-being, all of them with 8% of participation in the local market. The Brazilian brands, associated to ABF, present in Mexico are: Carmen Steffens, CCAA, Chilli Beans, Havaianas, iGUi, Information Planet, Louyt, Smart Fit and Spoleto.

More than 1,000 brands conform the Mexican franchising market, 80% of which are national concepts. The main segment is Food & Beverage, which brings together more than 350 networks and 9 thousand units. Education, Training and Coaching is the fastest growing sector in the country today. In addition to the Brazilian pavilion, the fair received delegations from Spain, the United States and Argentina.

Franchising in Mexico is a developing sector. Only 8% of the franchising companies operating in the country have more than 100 units and more than ten years of operation, and 25% are low investment franchising.

A nation of North America with near 127 million inhabitants, Mexico recorded 2.4% GDP growth in 2016. Mexican inflation was 3.36% last year and the unemployment rate was 4.1%.