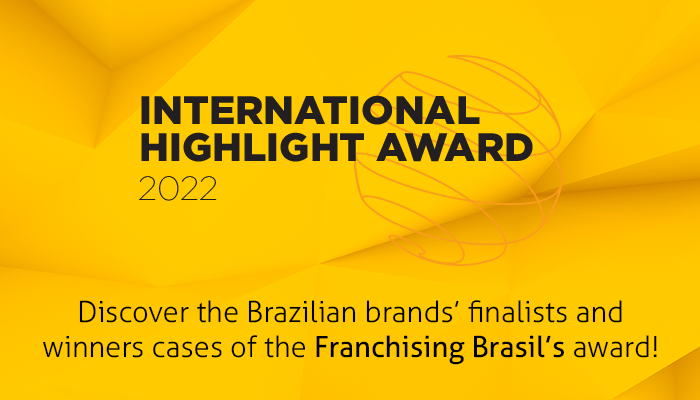 This Monday, June 13th, the five winning brands of the second edition of the International Highlight Award were announced. The award is promoted by Franchising Brasil — the result of a partnership between the Brazilian Trade and Investment Promotion Agency (ApexBrasil) and Brazilian Franchising Association (ABF).

The Chilli Beans, Espaçolaser, iGUi, Oakberry and Sobrancelhas Design franchises are the big winners of the 2022 edition. The result was revealed today on the social networks of ABF and Franchising Brasil, but the official award ceremony will be held during ABF Expo, on June 22nd, in São Paulo, at Expo Center Norte. ABF Expo is one of the largest franchise fairs in the world and this year’s edition takes place between June 22nd and 25th.

The award aims to consecrate the networks that, through participation in the program’s promotion and training actions, have started or achieved a consistent process of internationalization of their brands. The seal also had five other finalist cases from the following brands: Bibi Calçados, Casa do Construtor, CleanNew, Hot n’ Tender and Hope.

For Bruno Amado, executive manager of Franchising Brasil, international expansion is a fundamental strategy for Brazilian chains: “internationalizing a brand and expanding it in foreign markets is a challenge that has been met with praise by more and more Brazilian franchises. It is extremely gratifying to see the constant efforts and growth of our brands abroad. The works of ABF and ApexBrasil, through Franchising Brasil, such as the International Highlight Award, are designed so that we can further expand the presence of national networks around the world”, he quotes.

He also explains that the International Highlight Award is a moment to recognize the work of franchises that already operate abroad, and to inspire those who seek this journey. “Internationalization requires planning, a long-term vision, the ability to adapt to new cultures and local policies, in addition to looking for global partners. Actions that we carry out with the associated networks, ensuring the success of Brazilian brands in markets outside the country. In addition to the seal, the International Highlight Award plays an important role in encouraging other franchises in Brazil to expand internationally”, he concludes.

Discover the winning cases by accessing the e-book: click here.